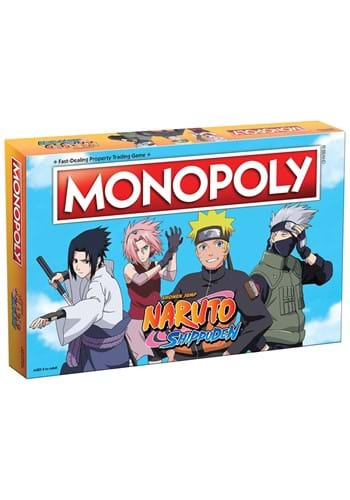 You don’t mean to be a pest by begging your family, friends, and neighbors to do all your favorite things with you. You just want it all to be acknowledged for what it is: great! Perhaps you’re taking a leaf out of your favorite anime character’s book? Never giving up is an awesome way to be, and Naruto sure is good at influencing people to join him in that thinking. So, we get it! And we’re with you. Naruto is a great story! Monopoly is a great game! Both deserve to go down as one of the best in their respective categories, just like the number one most unpredictable ninja himself!

If you still haven’t been able to Talk no Jutsu your village into playing a game of Monopoly or watching all 700 episodes of Naruto with you, this MONOPOLY Naruto Board Game should help! Whether it’s one play-through or weekly sessions, this officially licensed version of the classic game combines your two favorite things! Game mechanics remain the same as in the original Monopoly. However, instead of building a real estate empire, you’ll play to build your ultimate shinobi squad! Pay for food instead of taxes, recruit some valuable but questionable characters at utility and railroad spaces. Or listen to the Training cards before picking up a Mission. And of course, race to be the first to add those coveted royal blue properties, now Naruto and Sasuke, to your collection!

Just like the original, MONOPOLY Naruto is not for the faint of heart. But S-ranked gameplay or not, if you’re up for the fun, this rated everyone 8 and older game is ready for you and yours to discover the greatness waiting inside!