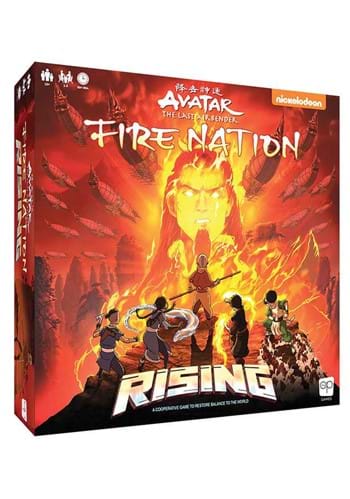 Have you ever wished that you could help Aang and his friends on their journey to defeat the Fire Lord? Now’s your chance! Bring home Avatar the Last Airbender: Fire Nation Rising and do your best to bring balance to the world before the Fire Nation causes total ruin. This officially licensed, cooperative game features characters and locations from the beloved Nickelodeon show and is sure to provide hours of entertainment for you and up to four friends!

Start the game by choosing whether to play as Aang, Katara, Sokka, Toph, or Zuko. Then recruit Heroes and battle Villains while advancing along the Balance Track. Reach the end of the Balance Track before the Villains traverse the Ruin Track to gain an advantage on the Day of the Black Sun. After the Day of the Black Sun event, players must use a combination of card playing and dice rolling to win Final Battles at three locations to end the Hundred Year War.

When all three battles are won, the heroes win the game! If any one team or ten total heroes are defeated, the Fire Nation cannot be stopped, and the game is lost. The box includes everything you’ll need to play, including the board, rules, tokens, cards, and dice. You can even adjust the difficulty level to make things even more of a challenge!