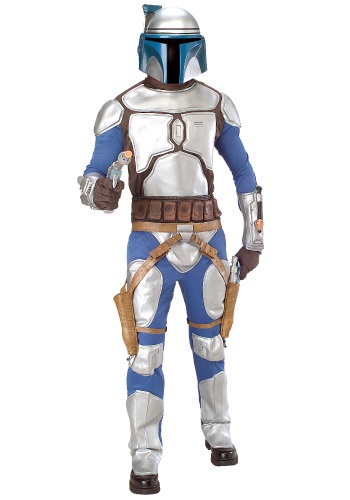 It isn’t like the life of a bounty hunter is ever considered easy, but there are a number of things that one can do in order to help make the whole process a good deal easier.  And, in order to give every one of you potential hunters the best chance that you have to rise to galactic infamy, we’ve done our due diligence in watching the actions of one of the greatest out there.  Of course, many leap right to Boba Fett as the prime example of bounty hunter excellence, but there was one before him that made it possible for him to rise anywhere near where he came!

Of course, we speak of Jango Fett, Boba’s … let’s just call him father.  Step two:  when selected to become the symbol of genetic excellence for an entire legion of Stormtroopers, say yes but make sure that you have a few stipulations.  Specifically, make sure that one of those clones is gifted to you so you can raise yourself as your son.  Step three:  make mini-you friggen awesome and name him Boba.  Step four:  bring down a virtual legion of rebels.

Oh, what’s step one, you ask?  Well, obviously it is suiting yourself up in some Mandalorian armor!  Even if the fighter caste of the Mandalorians might take some issue, who can argue with these results.  And it is time for you to feel the same way in this Deluxe Jango Fett Costume.  This polyester purple and silver jumpsuit has molded armor in the exact form of the most mighty warriors in the galaxy and the two piece Jango Fett helmet mask ensures that the T-shaped view will let anyone in front of you know that they are facing danger.  We’re still working on the functional jet pack… but soon!