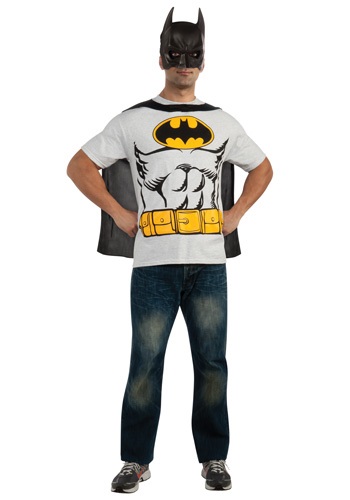 Batman has a lot on his plate. He's a super-rich man of influence so he's got to show up at fancy galas and make sure all his ducks are in a row fiscally. Some one's got to make sure the financial backing for that sweet technology is secure. So, on most of his days are spent wearing tuxes and when he's not wearing tuxes he's wearing his heavy, structured high-tech suit.

The thing is, we're not sure if people know this but Bruce Wayne is a pretty fit guy. We can't imagine that he works out in his typical black suit or his tux. We think that he would love to have a t-shirt like this, so if anyone happens to stop by they will know who he is even if they catch him as he's in the middle of his bench lift reps. The black cape would surely motivate him as Albert makes him lap the lab for the hundredth time (yes, his muscles are impressive but he's got to work on his cardio as well). So, whether you're working out like Batman or you're planning a laid-back Halloween costume, you'll look right at home in the Batcave in this Batman printed t-shirt!