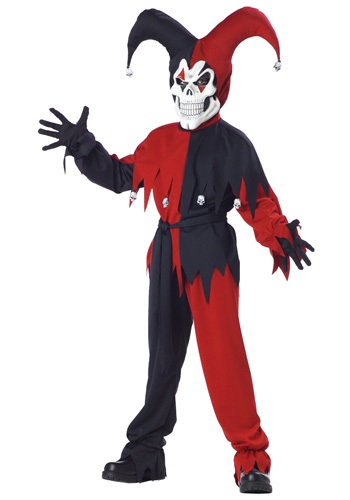 You’ve been the King’s official court jester for quite some time. You’ve gained his trust, but you know he’s a terrible ruler. He’s oppressive and cruel and unjust. So when a bunch of rebels approached you for help, of course you’re going lend a hand! And what better way to do that than become an evil version of yourself, right under the King’s nose? It’s not like he ever notices anything going on around him anyway—that’s why everybody wants him out! So, on the night of his dramatic overthrow, make sure to put on this King’s Evil Jester Costume and help scare him out of office.

It won’t be hard. This costume is guaranteed to frighten anybody, so a king who’s been sheltered his whole life will be an easy target. You'll probably get him to cry before the night’s end! We bet you can, no problem. One sight of you in this practically brings tears to our eyes.

For the most terrifying dramatic effect, this black and red costume has jagged hemlines on the shirt and cuffs. The hood covers the entire head and features a large jagged-edge collar with plastic skulls dangling from each point. Stuffed crescents sit atop the hood, with more dangling skulls on the ends. The waist sash is solid black and rests above the black and red pants. Most frighteningly, the molded vinyl mask secures with an elastic band and is guaranteed to make anyone’s legs shake, royal or otherwise.

Good job with that whole revolution thing. We’re not going to lie—we really felt like we were part of it by adding this costume to the dramatic effect. And hey, feel free to bust this costume back out any time a new ruler is getting a little questionable with their decisions...just to remind them what can happen!