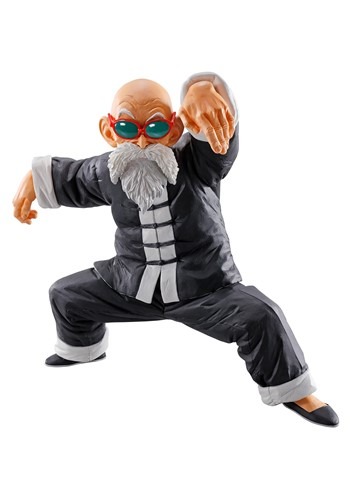 Master Roshi is over 300 years old. Don't let that fool you, though—the old codger can still Kamehameha better than young whippersnappers half his age! He even has a few tricks that no other fighter can perform (as long as he has a spare rice cooker laying around). Why, Goku and company even chose him to accompany them to the Tournament of Power over younger fighters like Yamcha and Tien. That's proof that age is just a number. Well, now you can add the accomplished martial artist to your collection when you get this Dragon Ball Master Roshi Chains!! Ichiban Statue.

Master Roshi is captured in all of his glory in this officially licensed Dragon Ball collectible statue. The figure is sculpted out of PVC material and comes with intense details. His beard has the spikes in all the right places. Intricate textures and wrinkles are formed into his martial arts outfit and his sunglasses are spot on. He's frozen in a deadly stance, prepared to take down even the most powerful of enemies! It's a striking statue that's truly befitting of the martial arts master responsible for perfecting the Kamehameha Wave and for training Goku during his formative years!