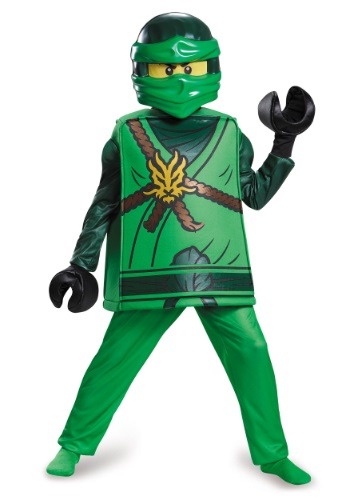 We are not going to say we had the idea for Ninjago before it became a “thing,” but we can remember there being talk in our office about our two most popular product lines, LEGOs and Ninja-related items. “It’s a shame we can’t just...meld them together into some kind of child-pleasing super-toy,” said our HR director, Mary. We all agreed. A power like that would know no bounds.

Well, Mary, we hate to tell you this, but there is such a super-toy, and you were right, it is a mega sensation. Ninjago is everything you thought it could be...plus dragons. So if your little one at home is as fanatical about Ninjago as the rest of the young world, we bet he’ll want to snatch up this Ninjago Lloyd Deluxe Boys Costume, before it’s too late! Not only is Lloyd the leader of the ninja team and the only Elemental Master of Energy, but he’s also got a four-headed Ultra Dragon and can perform Spinjitzu. So, uh, yeah...Lloyd is pretty cool--just like your little guy!

And while we admit that Mary should have gotten her idea patented, really, we’re sure she’s just happy to know that such a crowd-pleasing line of toys and TV exists in the world--like this boxy tunic and its LEGO-esque face mask. We mean, what is fortune and fame when you have the knowledge that your idea could have brought joy to millions of children? This costume is officially licensed (sorry, Mary) and boasts Lloyd’s signature green hue, which, coincidentally, is the color Mary’s face turned when she found out the news.