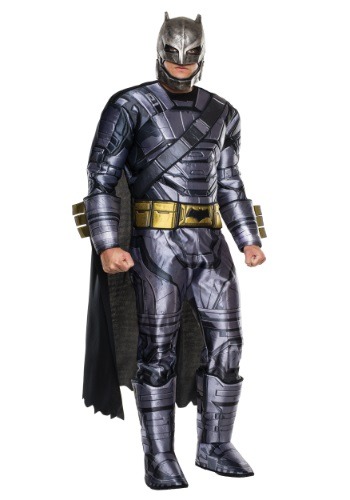 Now that we’ve had a glimpse of the danger that Superman can cause when he gets a little wigged out, you know that we’re in solid need of someone who has the ability to stand up to near godhood. Of course, he’s gonna need to do the work to really understand what makes the flying Boy Scout tick. And, that’s the trouble. How do you keep up with a guy who flies around at the speed of light?

Of course, we mostly hope that combat never comes down between these two mighty forces, but that doesn’t mean we can’t speculate! Between Dawn of Justice and those iffy risks of injustice, the good guys eventually have to come to a head. And, when that happens, the only way that a brilliant, but human detective can keep his own against the Man of Steel is by gearing up in some heavy armor, himself!

But, you can not only see how the mighty conflict between the Man of Steel and the World’s Greatest Detective might go down… you can be a part of the whole process. Thanks to the Dawn of Justice film and the fine fabrics we’ve gotten our hands on, you can step into the role of the Caped Crusader with this officially licensed Deluxe Armored Batman Dawn of Justice costume. This comfortable polyester and fiberfill jumpsuit has all the detailing to give you the look of the fearsome detective and the padding to give you any martial artsy muscles that might need just a tad more definition. But, even that isn’t enough to face Superman! No! You’ll be fully geared up in foam gauntlets and boot tops with molded designs that give you the full armorment you’ll need to go toe-to-toe with the last son of Krypton! Who needs kryptonite when you’ve got that on your side!?