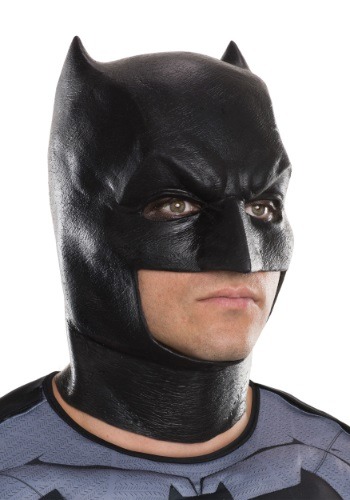 Being the Batman is not a station that we expect just anyone to take.  It requires a great deal to pull off the responsibilities of the Caped Crusader.  First, you need to have those top tier ninja skills.  Training under the masters of a secret society lead by a virtually immortal enigma might seem like the toughest part, but we’re fairly confident that you can already pull off all of those tricks.  Gadgets are the next requirement.  Whether you’re throwing your Batarangs or decrypting an android’s defense mechanisms, those are key… but also fairly easily figured.  (After all, you only need the ones that you’re going to need, right?)

So, we come down to the most important thing of all… the component that no one calling themselves a Batman can possibly go without:  the mask.  Now, this symbol of fear and justice can’t just be anything.  No, you need to be as genuine as possible.  What better way to get there than with this officially licensed DC Dawn of Justice Full Batman Mask.  The molded vinyl covers your entire head and has an outer texture that feels like dark leather.  Those villains won’t know what hit them!

Questions & Answers
Q: Does this cover the back of the head or just the front? I bought a cowl very similar to this under false pretence that it covered the whole head. But instead all that covered the back was a tiny little strap and I felt very cheated. Can I get photographic evidence if possible before I decide to buy this product? (1 Answer)
Asked by Anonymous | June 16, 2020