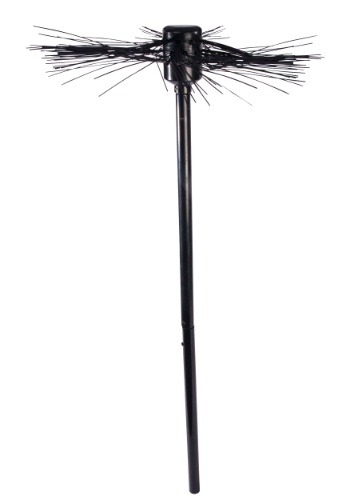 So you got invited to a Charles Dickens’ themed party. That is a pretty obscure angle to orient a party around, but hey, your friends have always been literary. Only problem is that you’ve never read any Dickens. Sure, you were supposed to read Great Expectations in high school, but c’mon, that was like, 600 pages. And you had cooler things to do. Anyway, if you pick up this Sweeper as part of a classic chimney sweep costume, you’re sure to be on the right track.

After all, Dickens was the guy who always wrote about smokey towns in England, right? Where people had to work in factories and wear overalls or something? A chimney sweep was probably in one of those books somewhere.

This old fashioned chimney sweeper is perfect for accessorizing a generic Dickensian character costume. Probably. The accessory consists of a sweep with plastic bristles, and can’t actually sweep a real chimney, so don’t get any ideas late into the night of the party. But if anyone asks, throw on a cockney accent and ask for a shilling.

A Tale of Two Chimneys

In all honesty though, you probably should pick up some Dickens at some point. If for no other reason than to give a little context to your chimney sweep outfit. Oh, and don’t forget to rub some dirt or soot all over your clothes, sweeping isn’t a tidy profession!