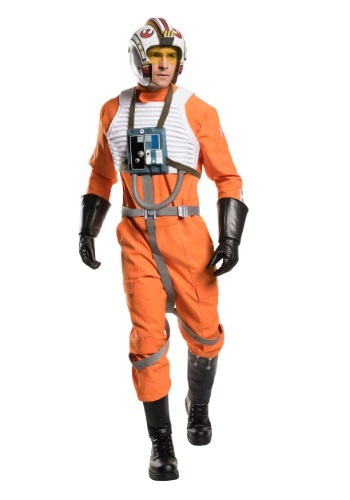 The X-wing starfighter is one of the greatest fighter ships known to the galaxy. With just a fuselage, a handy astromech droid, some S-coils, four laser cannons, and a handful of proton torpedoes, you’ve got all the firepower you need to bring down a space station capable of rendering an entire planet to cinders. It doesn’t hurt to have The Force on your side, but midichlorians alone aren’t enough to send a deadly bolt of explosive energy through an exhaust port the size of a womp rat. You’ve got to have the Rebel Alliance’s signature gun on wings to achieve all of that.

You’d look like kind of a dork flying an X-wing in jeans and a T-shirt, though. You need a Rebel flight suit to look at home in the cockpit. Providing more than just form, the uniform sports thermal gloves to keep trigger fingers supple, a flak vest to repel some of the more minor threats in the cockpit (not enough to save poor Porkins, unfortunately), controls for the suit’s various life support and interfacing systems, an emergency transmitter, and protective eye lenses. (Ever look at the sun for even a brief moment? Don’t try doing that from outer space without some serious shades.)

If you want to join Rogue Squadron, you’ve got to have the look, and we’ve got you covered. Our officially licensed X-Wing Pilot Grand Heritage Costume is as detailed as the Rebel flight suits from the original movies, complete with orange jumpsuit, flak vest (poor Porkins), chest harness, gloves, and two-piece helmet and mask. This costume is perfect for any Star Wars fan who wants to attend a con, Halloween party, wedding, funeral, or children’s dance recital in high style.