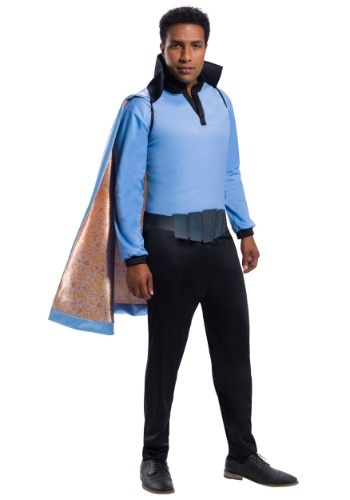 IN A GALAXY FAR FAR AWAY...

There was a supremely cool dude with effortless swag, (as the kids say nowadays), and that dude's name is Lando Calrissian (a supremely cool name if we do say so ourselves.) He doesn't have the best reputation in outer space but usually, the "cool dudes" don't gain notoriety by being polite and friendly to everyone they meet. Lando's Star Wars popularity skyrocketed because he's incredibly charming and exceptionally calculated and we can't help it— we're attracted to his enigmatic nature. Will he scam us or won't he? Is he cheating in this game of sabaac or isn't he? Is he going to deceive us in the end or will Lando actually help us out? The guy is just one big mystery but that's why we, and the rest of the galaxy, like him so well.

If you want to be the smooth space dude who's brave enough to bet his beloved ship during a card game (boss move, by the way) then this officially licensed costume will transform you into the one and only, Lando Calrissian. It's inevitable— people can't help but love a rogue.

The 4-piece costume recreates Lando's signature look from the movie, Solo: A Star Wars Story. The black cuffs and collar accent the blue long sleeve while the cape features a high collar, enforcing a roguish appearance. The cape attaches to the bottom via elastic straps that stretch around each shoulder and the cape's interior is a shiny gold fabric. The black elastic waistband pants are highlighted by the decorative black belt (included) and fasten around the waist via a Hook and Loop fastener tab.

NO LIGHTSABER? NO PROBLEM

Not all the cool guys from Star Wars wield lightsabers, some of them employ cool co-pilots like Nien Nunb! If Lando is your Star Wars spirit twin then pick up the Lando and Nunb bobblehead display figures too.