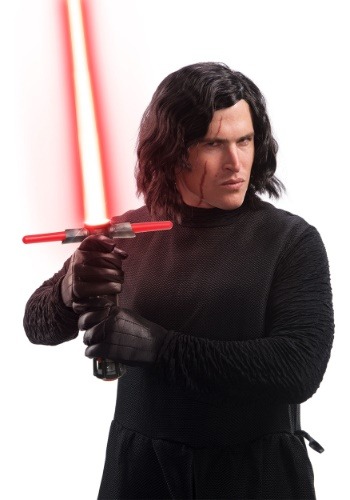 A TORTURED SOUL ON THE BRINK

The newest incarnation of strife in the Star Wars universe is none other than the kid and nephew of our former heroes.  Of course, the fact that a guy is related to some epic folks doesn't mean that they're guaranteed a nice, cozy life!

That's especially true for Ben Solo.  Take an adventurous father that can't quite leave the past behind him, a Jedi Uncle who is still coming to terms with his role in finding the balance of the Force, a mom that nobody could hold a candle to, and a grandpa that basically defined torment.  Well, where does a guy go!?

So, you've decided to strip away your name and go a galactic version of emo.  If that's the case, you are going to either need several years of changing your look or a little help from the Dark Side.  This officially licensed Star Wars Kylo Ren Wig and Scar Tattoo kit has the perfect dark wig and temporary tattoos to get you from Ben to Ren in a snap.

TRAGIC PAST IN A SIMPLE KIT

Rather than having to actually go through the tug of war between the Light and Dark side of the force and deal with all those complicated family issues, you can transform into Kylo Ren's conflicted self in a flash with this Wig and Scar Tattoo kit.  Save time and get right to griping about your tragic past!