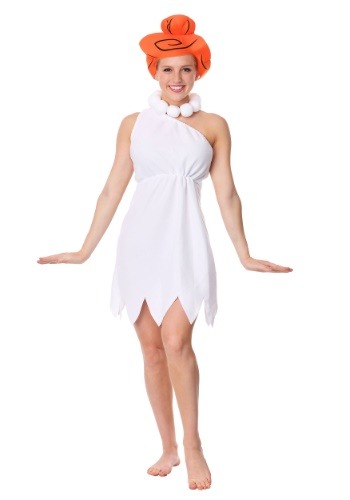 It's hard to say since we've never really seen what the stone age was like, but we imagine that Wilma Flinstone would have been quite the fashionista of the time! She and Fred would have been a power couple, that one couple that everyone loves. Them and their daughter, pebbles, would have been everyone's favorite family! They probably would have thrown the best dinner parties, driven the nicest stone cars, and had the cutest pet dinosaur there was.

Yeah, we think that if you took the Flinstones out of the cartoon and put them in the stone age, they'd have done alright. The one problem Wilma would have had would have been trying to do anything subtly with that bright red hair! That cartoon hair is so bright, you could see it for miles. Imagine trying to sneak up on the woolly mammoth you're hunting, and then it spots your hair and bolts, completely ruining your hunt. That would be frustrating!

This costume will have you feeling like you just stepped into a cartoon! You'll be wearing a one-shoulder dress, in all white, a look we consider to be a classic for Wilma. You'll be wearing one simple accessory, in the form of a giant necklace on an elastic cord! Your simple white necklace will go perfectly with your dress and your hair. Your hair will come in the form of a bright orange headpiece, to give it a more cartoony feel! Everything about this costume feels cartoony, and everyone you see will instantly recognize the character.

Wilma makes a great character on her own, but one way to make this even better would be to grab some friends and pretend you're the whole family! You could even make your own stone car. (out of cardboard, stone would be a bad choice.) It would make for one impressive costume! Whatever you choose to do, good luck and have fun!