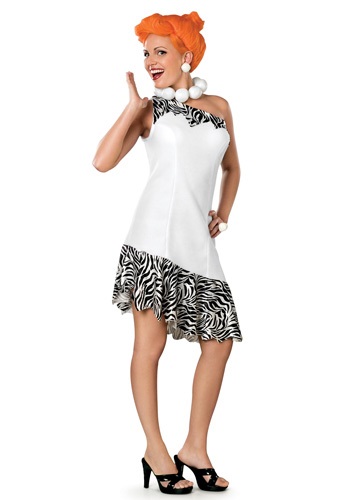 There are rumors and rumblings about a new reality series coming to the town of Bedrock. No one is clear on the specifics, but it’s apparently going to focus on the lives of the town’s prominent housewives, homemakers, and stay-at-home parents. This is exciting! Maybe you’ll get a chance to be on prehistoric TV. So throw on your best rock jewelry and do your hair in your favorite style and head out to the casting call. Oh, and make sure you’re wearing this Women’s Wilma Flintstone Deluxe Costume. It’s your best look and will guarantee you a spot on whatever show this might be.

We can’t imagine a more interesting Stone Age housewife than Wilma Flintstone—so you’re practically a shoo-in for the primary cast. You have a kid, a nice home, a huge personality of a husband, a dinosaur pet...what more could producers want in terms of potential drama?

You won’t need artificial flair when you’re dressed in this classic outfit. This officially licensed costume is a one-shoulder white fleece dress with a zebra print velour hemline ruffle and neckline edging. It’s stylish, chic, and just a little suggestive—exactly what producers will want. Also included as an eye-catching accessory is a necklace of large rock shaped “pearls.” Finally, don’t forget the included orange synthetic hair wig that will have you standing out from the rest of the plain cavewoman auditioners. Feel free to even bring Pebbles with you—audiences love a cute baby!

Get Used to the Cameras

Trust us, you’re going to have massive success in front of the camera. After six smashing seasons, you’ll be offered fashion lines and money just to show up to parties! It’s gonna be a lot of fun and you will owe it all to how great you look in this outfit!