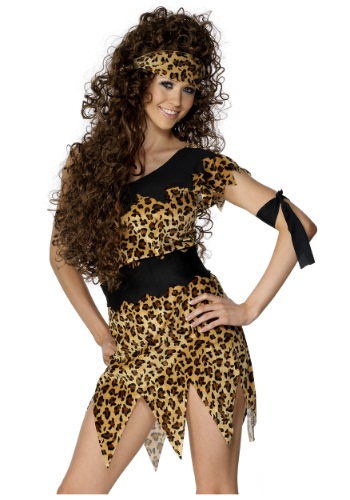 Queen of the Cave

Everyone always thinks it’s the man of the cave that swings the biggest club and brings home the dino-bacon, but it’s not the first time you’ve proven everybody wrong! Throw on this Wild Cavewoman Costume and unleash your primal instincts this Halloween. Show everyone that, not only do you keep the cleanest cave, but you also have no problem hunting down any of those primitive beasts. Whether it’s a ferocious jungle cat or a hungry T-Rex, you’ll be wearing its hide in no time! That will also make you the most fashionable cavewomen around. It’s not every day you see a lady rocking a saber-tooth lion minidress with a luxurious tyrannosaurus belt.

Hit up all the parties on Halloween in this Wild Cavewomen Costume and you can show everyone how the people in the Stone Age used to rock it. With an ensemble as exotic and exciting as this, you’ll look like a prehistoric diva and we’re positive everyone will treat you as such. If not, feel free to give them an attitude check with a good clubbing!

This leopard print velour one-shoulder tunic has a jagged hemline and the neckline is edged with a jagged black interlock. There is a black felt belt that is also designed with jagged edges and even has interlock fabric ties. The black interlock armband is also included with the costume as well as the leopard print headband.

Show everyone your wild side when you go out in this Cavewoman Costume. Everyone will be ready to hit the club with you… not to be confused with 'be hit by the club'. However, don’t be afraid to knock a few Neanderthals in the noggin if they start acting like rock-heads!