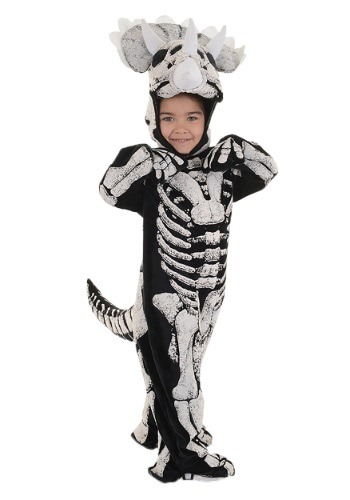 We Got a Bone to Pick With You

We think it’s ridiculous when people want to dress up as a plain ole human skeleton. Like, what’s even scary about that? We all have them and they’re a common decoration in a biology classroom. So unless you’re trying to scare people with the thought of a boring lecture, there’s really no point. However, when you dress up as a dinosaur fossil, that’s terrifying! Think of an army of the dead made up of reanimated dinosaurs, the thought alone is a horrifying nightmare.

Now you can make this devastating dream a reality when you grab this Toddler Triceratops Fossile Costume for your little dino-fanatic. Your kiddo will be one of the scariest monsters running around the neighborhood this Halloween. It’s not like a vampire or a zombie would stand a chance against this reanimated dinosaur fossil, no brains to munch on and no blood to suck. However, your youngster should make sure to avoid taking any werewolves head on. He may just end up as a pile of chew toys!

This jumpsuit has a printed triceratops skeleton on the front and on the stuffed tail attached to the back along with Hook and Loop fastener to easily close it up. The shoe-covers are attached as well and there is elastic around the lower edges. A pair of mitts is included and they also have elastic cuffs. Lastly, the hood has a printed skull and a soft-sculpted crest and horns. There is a Hook and Loop fastener strap under the chin to secure it around your kiddo’s head.

Night of the Living Fossils!

Make your little one look like he escaped from the new dinosaur exhibit at your local museum when you dress him up in this Toddler Triceratops Fossil costume. Why dress him up as a typical monster when you could make him one of the few creatures that went head-to-head with a T-Rex!