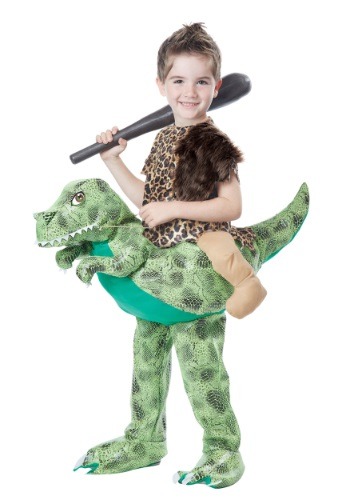 We’re going to tell you something that we don’t tell everyone: We took a poll around the office about what kind of professions we all wanted to be when we were kids—and the results are shocking. Turns out a cool 79% of our staff wanted to be dinosaurs when we were children. Some of that group still wants to grow up to be a dinosaur. We think it’s safe to assume this is a solid sample group and that most children think this way. And while biology obviously restricts our ability to become extinct prehistoric animals, we think this Child Ride a Dinosaur Costume is a pretty close substitute.

Because if you can’t become a dinosaur, ride a dinosaur, right? That’s how the saying goes, we’re pretty sure. And anyway, your kiddo will have so much fun running around on the back of a T-rex that they might forget that they’re not really the dinosaur after all.

This costume is one whole jumpsuit that your youngster will fit right into. The dinosaur body is soft-sculpted and features faux human legs on top and dino legs (where your kiddo’s legs will fill) on the bottom. Elastic bands hold covers over the feet and the shirt is secured in the back. The authentic looking caveman shirt adds a perfect touch of prehistoric style. All you need now is to accessorize with a caveman club, or if you’re feeling high class, maybe a polo stick. Who’s to say cavemen never played polo on the backs of dinosaurs?

Yes, we know that dinosaurs never existed at the same time as early humans. And yes, dinosaurs weren’t actually green and scaly, but rather covered in feathers and more birdlike...but don’t let those pesky facts get in the way of what your kiddo (probably) dreams of being when they grow up—a big, green, scaly dinosaur!