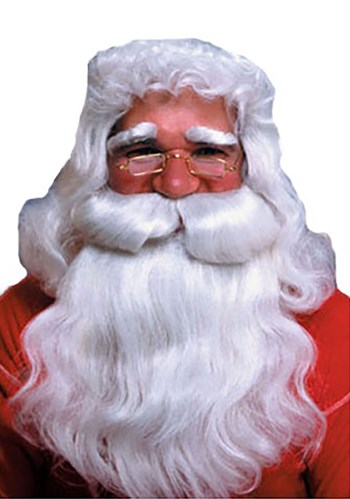 Santa has had a couple different looks through the years. He's rocked a forest green smock trimmed with thick fur, a flowy red robe with a golden staff and a tall hat. Then, at the turn of the nineteenth century, he got a makeover that's pretty much held to this day. He got that red suit trimmed with fur that we all know so well today. The thing that's never really changed since he became famous in 280 A.D? That luxurious white beard!

We get why he would want luscious facial hair while he's taking care of his reindeer and making sure things are running smoothly in the bitter cold of the North Pole. We do have one important question, though. How does he keep his facial hair looking fresh while soaring around the world in an open sleigh? It's a mystery.

You'll have a timeless Santa Claus look when you don this lush white beard with it's curled mustache and the matching wavy wig. Now, people are really going to expect you to step up to the plate in the gift giving department!