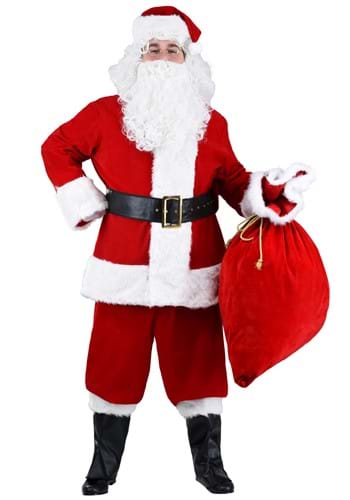 The Power of the Santa Suit

A Santa suit is not only one of the most recognizable costumes in existence, it’s as important a tool in the real Santa’s arsenal as his flying reindeer and sleigh, army of elven devotees, or bottomless sack. Does it have some magical properties, you wonder? No, not exactly, but without it, Santa would just be a bearded, elderly intruder into your home. But in his iconic red and white outfit, Santa is a welcome sight in most homes. We don’t (well, according to our lawyers, shouldn’t) recommend breaking and entering unless in some Santa Clause-esque bargain you’ve inherited Santa’s yuletide mantle, but this Premium Santa Suit should make you feel a little more welcome wherever you spread your cheer.

A Santa suit really should be plus-size, shouldn’t it? Even if you’re on the thin side, you’re gonna stuff a pillow in there unless you’re going for a decidedly non-traditional St. Nick. Sometimes one likes to picture a svelte Santa lounging close-shaven and bare-chested on a tropical beach somewhere mid-July (while his underpaid elf workers are up to their elbows in toy orders, no doubt), but by Thanksgiving, his gaining regimen is underway and he’s well on the way back to his jolly old self.

Some people say Santa only started wearing red when Coca-Cola started using the merry gift-giver in their ads, but Santa Claus’s red suit had already become his standardized appearance in American media around the turn of the 20th century. Yep, this is good ol’ American Santa Claus. No green robe, no Bishop’s hat, no evil counterparts to punish the children with violence––just the never-enforced threat of a lump coal in lieu of presents––and no weird racist sidekicks to explain either. Leave all that nonsense to those weird Europeans. Heck, they put real candles on their trees. In their houses. They’re clearly not concerned with doing things the easy or safe way.