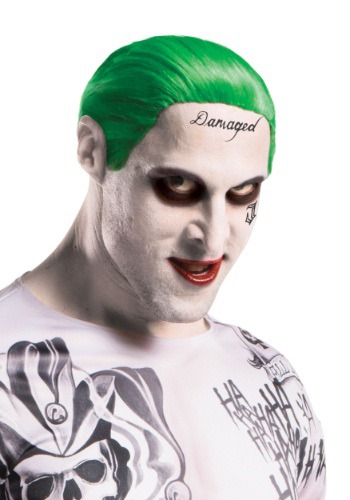 Comic book characters are pretty interesting people.  We watch them develop over several years and get to really feel that we know them, even the villains.  We can predict what they’re going to say, how they are going to dress.  It gets to be a sort of fun game when we try to guess which of their limited wardrobe they’re going to show up in or which catch line they’re going to use when they enter the scene.

Of course, that is until things take a dynamic shift.  When the craziest lunatic villain in all of Gotham goes from being a practical joke-playing madman and turns into one of the main folks in a suicidal mission for the good of mankind, well, things have pretty much flipped upside down.  So, it isn’t surprising that we’ll see the Joker step into a brand new look for his anti-villain days.  If you’re about to go on your own heroic adventure, it might be best that you look the part, too, with this officially licensed DC Suicide Squad Joker Makeup Kit.  This includes everything you need to give you the face lift that’ll make everyone grin right along with you.  Finish off the look with the tattoo shirt and vivid green wig and Harley herself will be flipping out over you!