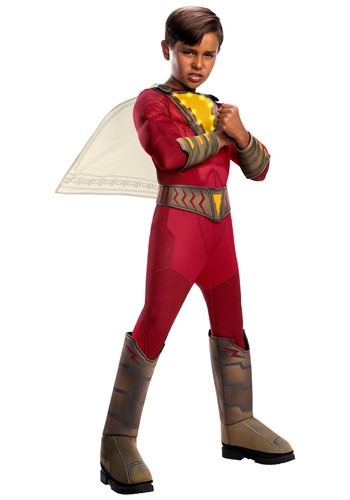 Billy Batson got to live every kid's dream! Just think about it. He finds himself on a subway... that transforms into the secret lair of a powerful wizard! After that, he passes a mystical test that grants him the powers of a superhero. He gains the wisdom of Solomon. He acquired the strength of Hercules and the stamina of Atlas. He gained the power of Zeus, the courage of Achillies, and last but not least, the speed of Mercury. That's a whole smorgasbord of superpowers! He also gets a really awesome outfit that seems to just shine!

Well, most kids will never get the chance to meet a wizard or get superpowers (sad, we know). Actually, most kids don't even get a chance to wear a superhero outfit like the one Shazam wears. The good news is that with this Light-Up Shazam! Deluxe Kid's Costume can finally get their chance at that outfit.

This Shazam! costume comes with everything your child needs to become a hero... well, everything but the superpowers! It starts with a bright red jumpsuit based on the one seen in the DC movie. It has printed textures on the exterior and it even has a light-up lightning bolt emblem on the chest. It also comes with a gold-colored belt that fits with a fastener in the back. Of course, no kid can be a superhero without a cape! This costume comes with a white and gold cape that attaches to the back of the jumpsuit.

Let's face it. The chances of a mystical wizard bumping into your child and granting him superpowers and a super-suit is pretty slim, but with this officially licensed costume from DC, any kid can have their shot at becoming one of the greatest superheroes of all time.