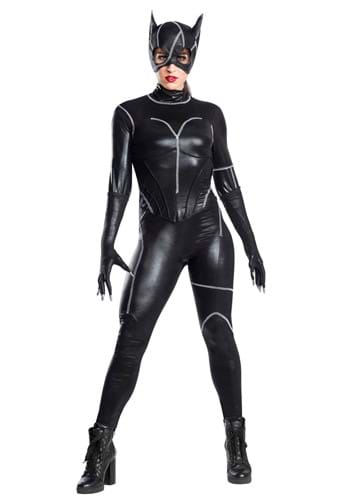 Once upon a time, deep in the FUN warehouses, there came a haunting sound. It was a chitter, a squeak. It sent our entire staff running for the hills with fear. Now, we can't blame them for freaking out at the sound of a bat swooping back and forth among the rafters. (After all, we have a lot of haunted and mysterious stuff back there. You can't be too careful when a swooping creature might actually be an upset spirit or one of those enchanted clown dolls!)

Even after we discovered that it was just a bat, we were still a little unsure how to proceed. That's when we saw it: the black cat. It was one of those amazing hunters that had the full paw. Polydactyl and everything! We were astonished as we watched it ninja itself up the shelves, flipping between rows, and even swinging from the hanging lights. The bat thought itself clever and mighty with its black wings and fearful history. But, it's got nothing on a cat with thumbs! "What does that story have to do with a Deluxe Catwoman costume!?" you may be asking. Well, it was the only thing the cat requested of us! Create the best Catwoman costume you can!

Now, who knows why a mysterious hunter cat would want you to have this form-fitting bodysuit? We suspect it is because the shiny black costume with its faux-leather look will have you feeling as though you're the genuine article. And, with Catwoman's background, maybe this mighty feline knows what it's talking about! Make it official with the cat claw gloves and half-hood that features pointy cat ears.

Cats Are the New Bats!

Some think that Batman is the true hero of Gotham. But, one look at this Deluxe Catwoman costume will have everyone knowing the truth. It's time for you to take over!