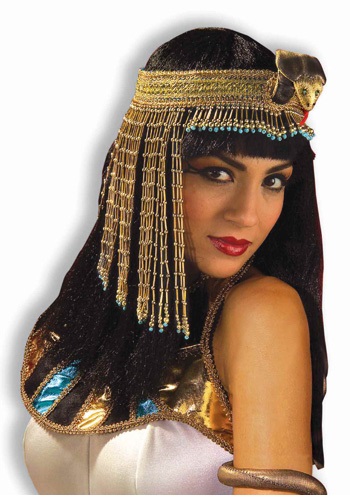 So we appreciate a nice crown just as much as the next costuming company. But can we let you in on a little secret? After a while crowns seem so blase. Maybe it's because every princess, king, and emperor has a crown around here. After a while, they all start looking the same.

Which is why we appreciate it when a royal comes along who isn't so vanilla. So bland. So predictable. We're talking rulers like Cleopatra. Not only did this woman like single-handedly rule the Nile (and give her Roman counterparts a run for their money) she was smart. Like linguist and military commander smart. And of, course, like any fabulous ruler, she had her own flair when it came to what she wore; including crowns.

Not only could Cleopatra get away with the more historic Pharoah crowns, she also partook in the fancy headdresses of her country. They looked something like this Queen Cleopatra Beaded Snake Headband. This embroidered headpiece is encircled with gold beading that is mean to don any royal head. At the front is the head of a snake, which was also pretty typical of Egyptian headdresses. Talk about a lady of the Nile.

Maybe you're like us. Maybe the king and queen schtick is getting old. That's totally fine and we understand. So if you find yourself looking for something a bit more exotic than the typical Western Civilization affair, well, then we've got you covered. Cleopatra-style.