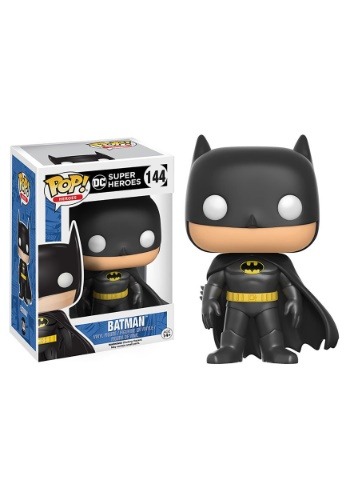 Batman is old school. He’s been keeping watch over Gotham City, locking up bad guys and dressing like a man-bat since 1939. That takes some serious dedication… and some costume changes. It’s true that Batman’s costume has made some slight changes over the years and he even decided to wear a pink costume at one point to make sure no one noticed Robin’s injured arm. (What a thoughtful guy). This POP vinyl version of Batman celebrates the tried and true version of Bruce Wayne’s signature costume!

This Classic Batman POP vinyl is a Funko figure that captures the essence of old school Batman! It stands nearly 4” tall and merges the signature style of POP vinyl figures with a classic black and gold variant of the Dark Knight’s outfit. He’s ready to stand vigilantly on your desktop to scan for any troublesome villains who might threaten you during your busy day!