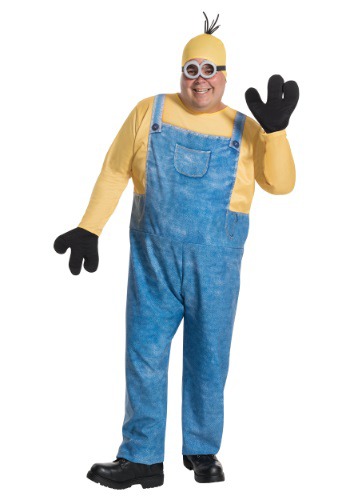 When your entire species is dependent on serving a powerful master in order to have any chance of survival, there are a number of crucial roles that your tribe is going to highlight.  Obviously, there is the banana hunter.  Without this guy, the entire collection of minions might lose their yellow… and if you thought a yellow minion looked odd, can you even imagine a clear one!?  Then, of course, there are the scouts.  They keep their eye(s) on the horizon for powerful entities that might become the ultimate master, bringing the whole group into the proud echelon of henchmen fame.

But, the most important minion role of all is, oddly enough, the leader.  Being top subordinate might seem a bit convoluted, but these are the truths of tribal survival.  And, of all the minions, only one is able to stand tall on both feet and look into the future with both eyes:  the mighty Sir Kevin!  Not only is he the guy everyone looks up to (and not just because he’s tall), but he’s the only minion in their very, incredibly long history to ever be granted a title!

So, stand tall among the rest of your minion allies and bring the whole banana bunch into the future with this plus size Minion Kevin Costume.  This long sleeved yellow jumpsuit features the jean overalls that we’ve come to recognize as the minion uniform as well as a pair of silver goggles that will help to perfect that future sight.  Your three-fingered gloves will make handling bananas … well, probably a bit more awkward, but what is a minion if not an adorable clutz!?