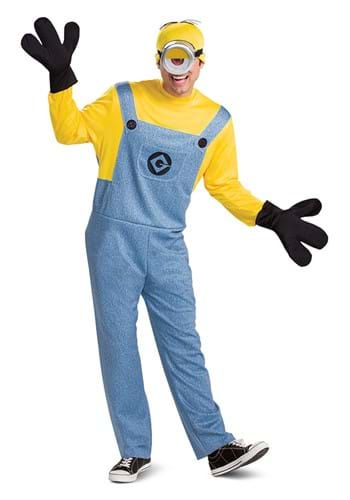 Being a Minion can be hard sometimes! Not everyone understands that you don't MEAN to be evil and destructive - you just need to serve someone who is. Ever since you popped out of the primeordial ocean billions and billions of years ago, looking like adorable, smiley yellow Twinkie, you have yearned for a master to follow in his (or her) quest to be the biggest and baddest that the world has ever seen. At first, you thought you'd gotten your answer in the T-rex, but when he went extinct, you had to strike out on your own. Misadventure after misadventure later, you may have found the perfect master - but first, you'll need the perfect uniform!

Have your friends in stitches from your crazy antics with this officially licensed Deluxe Minion Adult Costume! The one-piece jumpsuit is made of stretchy jersey-knit fabric that moves with you whether you're stealing a crown, pilfering a pyramid, or operating a shrink ray. It's designed to look like the Minion's famous blue denim overalls over their banana-colored skin. It even features overall straps with appliqued "buttons" and a chest pocket with Gru's logo emblazoned on the front. The foam-backed black gloves have 3 oversized fingers so that you have the right number of digits to be a Minion. An oversized eye goggle lets you have Stuart's big-eyed appearance. Top it off with the included knit skullcap with its tuft of felt hair.

Good to Be Bad

Sometimes your goofiness makes you unreliable. Sometimes you love fart jokes a liiiittle too much. But you are a sweet and hilarious companion all of the time - just ask Gru and the girls! This awesome costume will let you embrace your Minion personality. Better start brushing up on your Minion-ese!