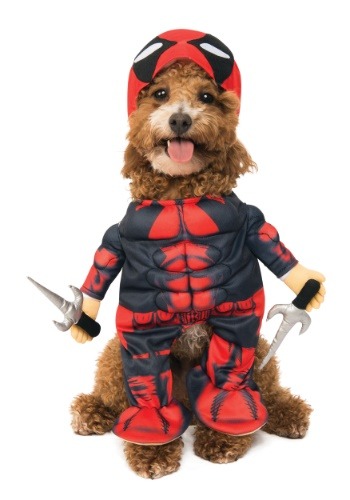 Deadpool is one of those odd characters that manages to exist in concert with just about everything, despite the fact that it seems like he wouldn't really get along with anybody in the fictional world.  (It's probably all those references to them being fictional characters, we guess.)

But, when Deadpool merges with another character to create Gwenpool and Deadpool the Duck, we're looking at some really odd levels of hilarity.  But, with his fourth-wall breaking abilities, what is to stop him from, say, becoming your own adorable pupper!?  Actually, thinking about it, that might be really adorable...

See what Deadpool fun is truly like when your pooch comes running down the hall wielding a couple swords!  Fear not, they're just soft sculpted and part of this Deadpool Pet Costume.  This front coat gives your pup the look of the iconic comic character, complete with the black and red muscled armor and the hood styled after Deadpool's mask.

THE NAMING RIGHTS ARE ALL YOURS

When you gear your pet up with this amazing Deadpool look, you're bound to have some pretty amazing adventures.  Not only will everyone already love your dog for all the normal reasons, but they'll be excited to meet the crazy comic character.  You'll just have to decide how to merge the name with your pet's!  We definitely recommend -pool at the end!