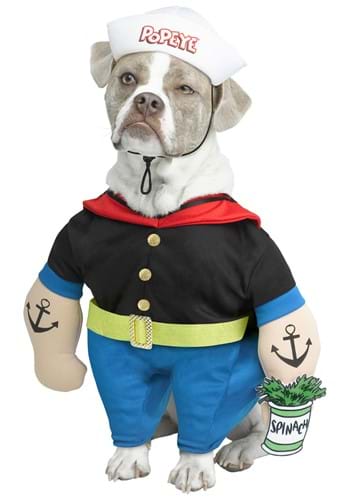 Okay, we know that Popeye is supposed to be a tough guy, but this dog costume is just too cute. This Popeye costume is perfect for any pup who isn't getting the respect they deserve. For those who aren't familiar with the character, Popeye the Sailor Man is a fictional cartoon character created by Elzie Crisler Segar and first appeared in the daily King Features comic strip Thimble Theatre in 1929. He was so popular that he became the strip's title later down the line. The character has also appeared in numerous theatrical and television animated cartoons. Over the years, Popeye has also appeared in comic books, television cartoons, video games, and hundreds of advertisements; he is just that timeless of a character! Popeye has been through it all, ranging from being a fighter pilot to a detective. If it wasn't in his name, you might forget he's a sailor. Popeye may be a man out of time, but he embodies honorable characteristics to this day, like chivalry, defending the little guy, exercising, and eating your veggies. If you have a pet that you know this classic cartoon costume would be great for, you have to pick up our officially licensed Popeye Costume for Pets.

This sailor pet costume features a step-in tunic and has a hook and loop fastener on the back, so taking this dog costume off and on shouldn't be a hassle. Stand back satisfied as you chuckle at the stuffed arms holding a felt fabric can of spinach. The adorable foam hat has an elastic band that secures underneath your dog's chin. If you are a fan of the classic cartoon and want to get your pet a solid costume, pop a spinach can and pick up our Popeye Costume for Pets!