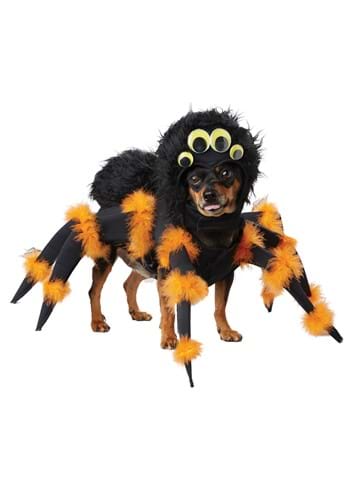 We here at FUN.com have all the insider access to the costume scene, and we've got it on good authority that this newest monster will be a hit. They come from the basement, the forest, perhaps the trunk of your car, and it'll freeze you in terror at first sight. The demented look of this twisted beast can only be one monster, something new, something creepy and crawl-y... the Spider Pup!

It might be hard to stomach, but that's right, this spider-dog hybrid is known for making super-sized spider webs as well as for eating bowl after bowl of puppy chow nonstop... We think he might have sinister ambitions as well. (We just really don't want to know what happens when you get stuck in that web)! If you'd like to transform your canine friend into this diabolical demon, just get him this unique and detailed spider costume for pets: our Spider Pup Costume!

Your pup will have a nightmarish look for the big puppy party, but the good news is that his wicked transformation will be entirely reversible. Just take this fun plush costume off, and we're sure that your pet will easily be able to discard the memory that their reign of terror created. It's all-polyester, fastens with Hook and Loop fastener around your pup's chest, and has eight foam legs sewn to the sides. *shudder*

Wax On, Wax Off

There really isn't a downside to this costume, because we're, like, 70% sure they'll just as easily be able to put aside the insatiable bloodlust that they felt when they became this amped up spider beastie. Well, we do want to be upfront, we're fairly sure they won't have a taste for blood after you put the costume away. Yeah, reasonably confident... Just, erm, maybe bust out that old kennel for a night or two.