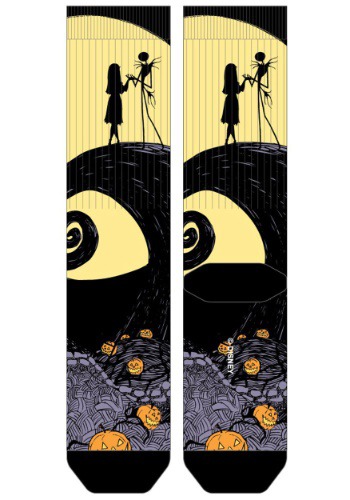 The most romantic scene in any movie ever? Pshh. Easy! Move over Pride and Prejudice, Sally and Jack have got this contest down! They got us on every level. Sally is wishing on a wilted flower. They're standing in the soft snow as they sing to each other in front of a giant moon. There are some characters that are simply meant to be seen in silhouette *cough* nice legs Jack *cough*

All romantic movie happenings are slightly impossible. For one, we think we'd be a little more uncomfortable kneeling in the snow than the graceful Sally but mostly because none of us are the living dead or Claymation figures. But hey! Calm down! Don't despair. These socks will put you in touch with the macabre romantic that's slumbering deep in your soul. Your feet will be covered in cheery pumpkins and a swirling foreground. On your ankles, Sally and Jack will come together for that final romantic scene. Talk about being romantic from your head down to your feet!