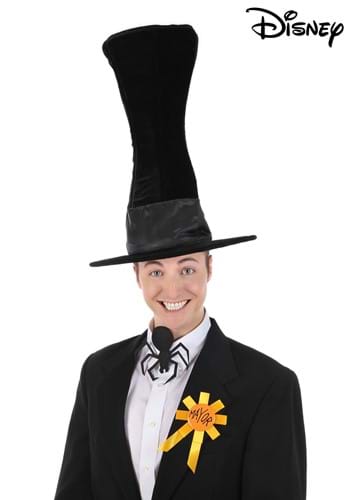 Since the debut of the 1993 Tim Burton movie, The Nightmare Before Christmas, character costumes such as Jack and Sally have been extremely popular. Even though the stop-motion movie came out over 25 years ago, the category continues to be a hit and sell out each Halloween, year after year. Even secondary characters like Oogie Boogie and Lock, Shock and Barrel are popular (even though they're sneaky tricksters.) We're glad another The Nightmare Before Christmas character costume is being thrown into the mix, like the Mayor of Halloweentown costume kit. Now you can transform into the clumsy, cone-shaped, comedic 2-faced mayor with just a few helpful accessories. But don't worry, you won't have to make any important decisions while wearing it because this look is all about fun!

This officially licensed kit comes with the hat, spider bow tie, and badge. The stovepipe-type hat feels like velvet and features wire in the brim, keeping the cartoonish shape. The spider bow tie has an attached elastic band so it can stretch around the neck while the 'Mayor' badge has a safety pin adhered to the back.

Tell each one of your friends to dress up as a different Halloween Town character to create a Tim Burton themed group costume!