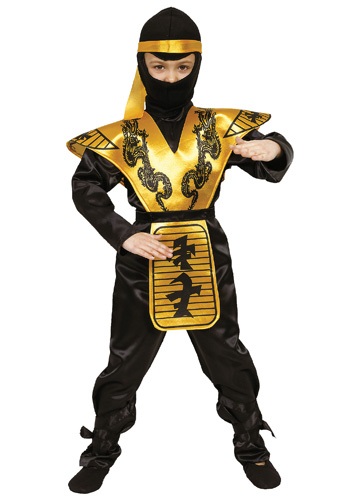 There's something so exciting about playing a fighting game. When you're pitted against your best friend and you watch the screen blink. The countdown. Those little tingles running down your spine in anticipation. Your fingers twitch, your heart beats faster, and then... POW! The game is afoot as you and your friend smash buttons, attempting to be the first one to lay your opponent flat in the dust. A punch! A kick! Weapons are thrown across the screen and screams of pain shriek out of the speakers... you get the idea. We're pretty sure you know exactly what we're talking about and the kind of excitement that comes from a good fighting game.

Which is why we're totally excited to go to the next level. That's right, we're talking costumes. Suddenly smashing buttons on behalf of your favorite warrior isn't enough. You want to be the warrior. Learn the stealth of the ninja. Fight with skill and gusto (and a few awesome weapons). We totally understand and we bet we're not the only ones. You know a few fighting ninja-enthusiasts too, don't you?

We've got your back. If you know someone who is ready to take their game to the next level, we've got this great Mortal Ninja Costume. It's got a black shirt, black pants with leg ties, and yellow tunic with attached belt, including some fancy printed patterns. There is even a pair of gloves and a black mask with an attached yellow headband. In this outfit, your little fighter will be the most fearsome ninja around.

Voila! Your aspiring ninja will look the part in this fantastic costume, whether they're honing their fighting-game skills or working on some skills of their own. Just know that we here at FUN.com don't condone any knock-outs in real-life; keep it for the game!