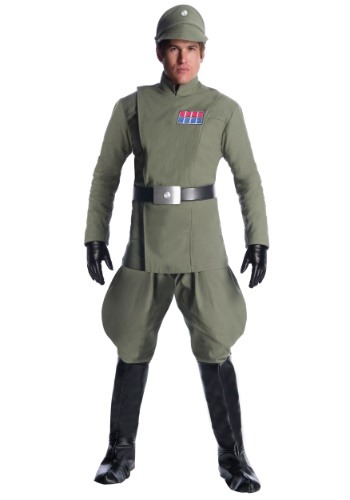 Working in the Imperial Navy is a pretty good gig for a lot of people. Contrary to much of the Rebel propaganda, there are hardly any murders of the officers and crew by the rogue wizards who rule over the Empire. For the most part, it is a very safe and well-respected line of work!

Sure, you always have to watch out for backstabbers, rebel sympathizers, and paranoid officers above you in the ranks, but isn’t that true of every job? At the very least, as long as you stay in the middle of the pack and don’t try to rise to the top, you should be pretty safe and well-paid. That is especially true if you pull one of the safe posts, such as on the Death Star, or on the Executor. Nothing bad could happen there, right?

Being an imperial officer is more about style and bearing than any other factor, so you will love this Star Wars Premium Imperial Officer Adult Costume. It does all the work in the looks department; all you need to bring is that classically harsh and severe bearing! From the boot covers to the officer’s hat, you will look the part in this awesome costume. The jodhpur pants and wide belt will make you seem very imposing, much like the great Grand Moff Tarkin himself. The sewn-on patches add the final touch that will place you firmly in the middle tier of the greatest military force ever to take to the stars!

If you are looking for the best way to cosplay as one of the bad guys of Star Wars, then you will love this costume. The classic look will be a hit at any party, be it imperial or rebellious!