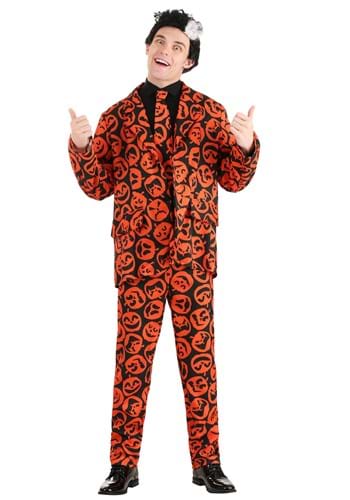 Do You Know David?

Do you get David S. Pumpkins? Don’t get cute with us! We know the truth. No one does. That’s sort of his whole spiel. No one can figure out where he came from or how he got that suit. No one knows why he hangs out with those skeletons. No one can figure out what is supposed to be scary about the guy and no one really knows what the deal is with that white streak in his hair. No one knows why he’s always hanging out next to the elevator door all of the time either. Everyone can agree on one simple fact though. He might be the greatest thing that has happened to humanity since the invention of fire.

Okay, so maybe that might be taking it a little far. Maybe he’s just the greatest thing to happen to humans since sliced bread, and we can definitely tell that people do love their David S. Pumpkins, and so do we. He made his debut on Saturday Night Live in a wacky, off the walls sketch that has found its way into our heart. That’s why we just had to get this David S. Pumpkins suit costume in.

This officially licensed suit costume comes with a Jack o lantern print jacket that has buttons in front. The matching pants have an elastic band for fitting. The tie features the same repeating pumpkin print tie to help you keep it classy while you’re living the life of David.

When you wear this licensed Saturday Night Live costume, you can spread your own brand of Halloween fun across the land. Just make sure that you pair up with some of your best pals. After all, you’re going to need a couple of buddies to play the b-boy skeletons!