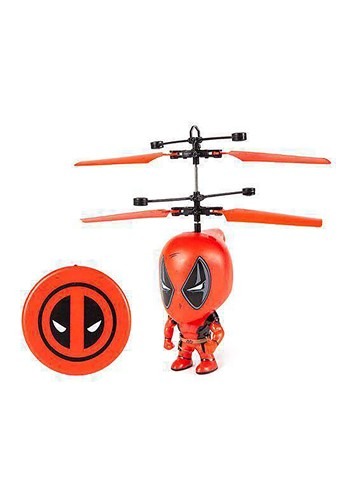 Hold on just a second here. We've looked at a list of Deadpool's powers. Nowhere does it say flying! He's got regenerative capabilities, possible immortality, heightened agility and strength. He even has access to a high-tech belt that lets him teleport, but flying is not on that list. This Deadpool Flying Figure IR Helicopter is inaccurate to the comics. We're just going to have to shut it down! Shut it all down!

Well, it is pretty fun though... and we could totally see Deadpool trying to attach a propeller to his head in a comical attempt to fly like Storm. Okay, okay. The helicopter can stay!

This nifty little toy gives Deadpool the power of flight! The small toy is officially licensed from Marvel and puts a cute spin on Deadpool's classic look. The helicopter is easy to fly and it's made out of durable material, so he can take a few knocks just like the real Marvel superhero. The copter can fly up to 15 feet and is intended for use indoors. To fly it, you can control it with your hand! We doubt Deadpool will be sprouting wings or a propeller anytime soon in the comics, but we'll let it slide because this toy is just so darn fun!