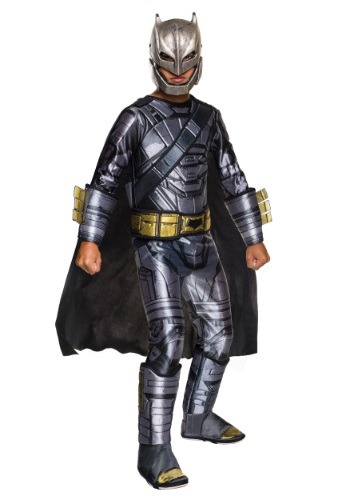 Does your child have a score to settle with Superman? We get it. Superman is such a pretentious goody-two-shoes. He thinks he’s so cool, with his ability to fly, and his x-ray vision, and his super strength, and his lasers. He just runs around doing whatever he wants, and no one can tell him to knock it off because no one is nearly as strong as he is. It’s all well and good now, while he feels like doing superhero stuff, but what if he’s ever in a bad mood? What is someone cuts him off on the freeway, or takes the last slice of pizza, or beats him at Monopoly? Then what will protect the world from his inevitable, city-leveling wrath?

As Batman, you know it’s up to you to keep Superman in line. But how can you go toe-to-toe with someone who’s pretty much an alien god? You’ve got cool gadgets, but you can’t fly. And you know sweet martial arts moves, but you can’t punch through a building. That is, you can’t do it on your own. But if you’ve got your special armor, then it’s a different story. Then Superman isn’t quite so unbeatable, is he?

Before your little Batman heads to Metropolis to take Superman down a peg or two, make sure they’re safely encased in this Deluxe Child Dawn of Justice Armored Batman Costume. The officially licensed jumpsuit includes foam-padded chest armor, gauntlets, a belt, boot tops and a cape to billow in the breeze. It also has a hard molded face mask to complete the look. Now you’ll be ready for anything the Man of Steel tries to throw your way!