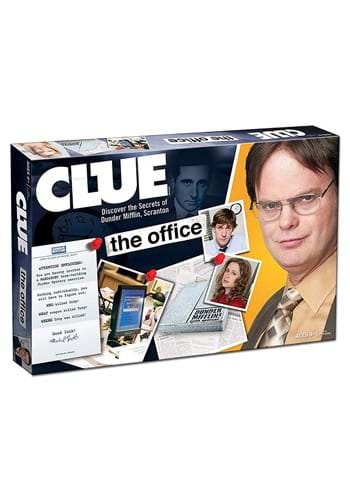 CLUE The Office Edition Board Game

A murder most foul has occurred in the Scranton branch! Toby Flenderson, Dunder Mifflin's HR representative, has been murdered and it's up to the office staff to figure out who committed the nefarious deed. Of course, our Michael Scott seems to be the obvious suspect, since he's the only one who actually seems to have a problem with Toby... but nevertheless, you must gather clues and use your wits to find the culprit in a very different version of the classic CLUE board game.

In CLUE The Office Edition Board Game, you get to play as 1 of 6 different characters from the show, Jim, Pam, Dwight, Stanley, Angela, or Andy. The plays much like a normal game of CLUE, except each character gets their own special move that they can use once during the game. It also comes with customized weapon pieces based on different episodes from the show. There's the bat that flew into Meredith's hair, the George Foreman grill that burned Michael's foot, a Dundie award, and plenty more! The game also comes with a game board based on the office from the show, The Office. If you're a fan of CLUE or The Office, then this is the perfect game for board game night.