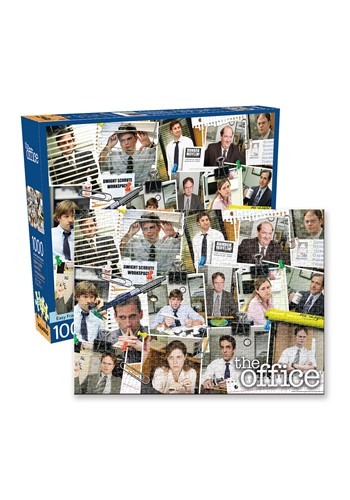 Do you have a favorite? It's so hard to choose, isn't it? In the first season, we were big on Jim. Sure, his hair still looked a little high school back then, but he was such a charmer. By season 3, Dwight was our favorite. He may have been a bit of an arrogant blockhead, but he always made us laugh. Pam instantly became our favorite during that beach getaway episode where she had a show of courage. And Kevin? Well, watching him drop a giant pot of chili may be the funniest thing that's ever happened on the show. Heck, even Michael Scott got us by the end! In the beginning, we couldn't stand him... but even he grew on us.

Well, what we're really trying to say is that it's tough to pick a favorite character from The Office. The amazing ensemble cast kept us laughing through all of the seasons (yes, even the last couple of seasons). This puzzle, perfectly captures some of our favorite characters from the show! The Office Cast 1000 Piece Puzzle comes with 1000 pieces that form a collage of photos from the show. Jim, Dwight, Pam, Michael Scott, Ryan, and Kevin are all here!