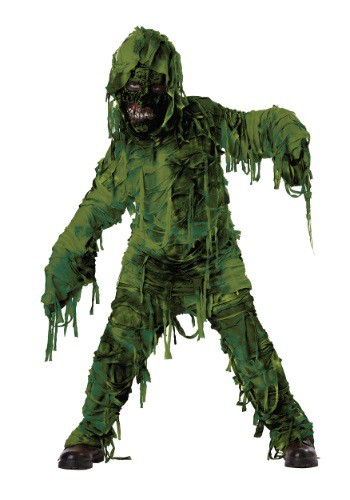 These days, it seems like every classic monster is getting a Hollywood reboot. There are giant radioactive lizard monsters, other notable kaiju, genetic experiments, space monsters, demons, aliens, and on and on. But you know who’s not getting a lot of love in all of this rebooted material? That’s right, swamp monsters! And since your kiddo has always been a fan of the underdog, why not pick up this Boys Swamp Monster Costume for him?

Seriously, he’ll love the fact that it’s a monster that’s sort of forgotten to time. The thing is, though, it’s still totally scary! Can you imagine a green covered slime creature crawling out of the local swamp under the cover of darkness? It’s unstoppable (not to mention a perfect metaphor for the issues of uncontrolled pollution in local ecosystems)! It’s terrifying…and the time is ripe for your little guy to remind the world of how scary this monster really is.

This slimy outfit is perfect for a kid who loves unsung monsters from the past. The costume consists of a matching shirt and pants covered in green and black print and vine-like fringe that will give your kiddo a swampy appearance. He doesn’t have to trail muddy water behind him everywhere he goes, but if you want to add to the costume (and you’re not in your house) you certainly can make it wet, we suppose. Finally, also included is an acrylic face mask that transforms your little dude into the fearsome monster everyone will soon be terrified of once again!

There’s No Stopping It

We can’t think of a single weakness this kind of creature would have! Sun, water, dirt, it’s all good for it. Swamps are too wet for fire to do any damage, and even herbicide wouldn’t really work because these greens are too strong. So good job for your kiddo, he can now scare the world with the most unstoppable force of nature out there! We bet Hollywood will be calling in no time!

$34.99
Item # CA00420 | Write A Review
Sign Up To Be Notified When Your Size Is Available
Items Included
Product Highlights
Size Chart
MLXL
Inches Centimeters
Costume Sizing Tips
Product Description
Questions & Answers
There are no questions for this item yet. Be the first to ask a question!
Ask a Question
Reviews Write A Review