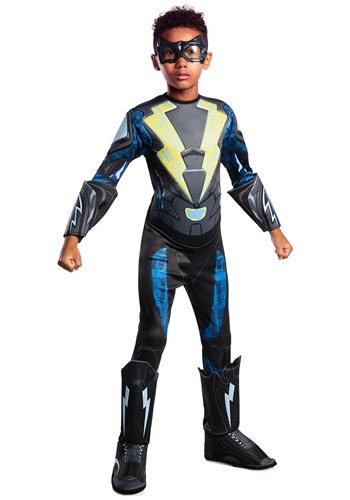 What it Takes to Be a Hero

Does your child want to be a superhero? Of course he does! It's every child's dream to fight bad guys and save the day, but if your child wants to become the electric hero from Black Lightning, then he's going to need a few things. First off, he needs to have a strong sense of justice! Jefferson Pierce always does what's right and if your little one plans on being a superhero, he's going to need that same noble attitude. Second, he's also going to need a few super moves. Black Lightning has powerful electricity-based powers that he got through an accident during an experiment... but we think your little one can get by just by making some sweet electricity noises with their mouth! Finally, your child is going to need an awesome superhero suit, and that's our specialty! This officially licensed Black Lightning Deluxe Costume will transform your child into the iconic DC superhero in an instant!

Based on Jefferson Pierce's outfit from the CW series, this kid's Black Lightning Deluxe Costume starts with a jumpsuit that fits with a hook and loop fastener in the back. The suit has printed details, like faux armor pieces and lightning bolts to add bring an electrifying aura to the outfit. It even has foam gauntlets around the wrists for added crime-fighting style. The foot covers fit over most pairs of shoes, so your child can slip into their favorite pair of shoes when they head out to face off against supervillains! Finally, the costume comes with a pair of goggles that fit on your child's head with an elastic band.

If your child has what it takes to fight the bad guys, then it's time to get him the uniform of a real superhero! This Black Lightning costume is based on the superhero from the series and will have them ready for anything!