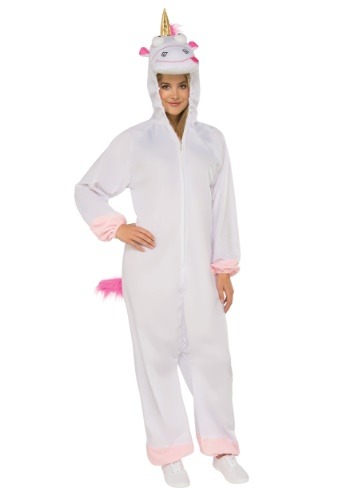 Fluffy Despicable Me Costume for Adults

There's plenty to love about the "Despicable Me" movies. Little ones can totally connect with Felonious Gru's daughters, after all, they may be as cute as a button but they also all have their ups and downs. For instance, she's mischevious which often leads to trouble in a supervillain's house but that doesn't mean she's not super sweet. Then there's Margo, intensely smart, and intensely shy. The thing is, she's got plenty of sass once she's feeling at home. Last but far from least, there's Agnes Gru, a sweet innocent girl who knows how to get what she wants and loves fluffy things and unicorns more than anything in the world!

So, when she went to the carnival and saw the unicorn hanging at the shooting booth, she had to have it. Gru tried and tried to win it. Strangely enough, the game just might have been rigged. Who'd have thought? Lucky for Agnes, her newly adopted dad is a supervillain so he took care of that target without any issues. Now, Agnes gets to carry around Fluffy wherever she goes!

So, whether you want to dress up in a group Despicable Me costume with minions, the girls, and even Gru himself or you're going solo, you'll love dressing up in this Fluffy costume. It zips up the middle so transforming is no-nonsense. The hood is sculpted with a nose, 3-D eyes, and a gold horn. It even has a bright pink tail on the back. It's nice to be everyone's favorite unicorn!