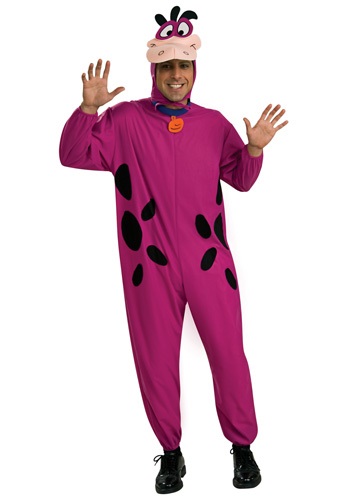 You're the guy everyone loves to see. Your greetings are epic, your loyalty is infallible, and your energy is off the charts! You're always there, but rarely do you need to be the center of attention. And you love to fetch a bone. Wait...what?

Ohhhh, we get it. You're Dino, from The Flintstones! How great. Everyone adores Dino. In fact, for us, Dino was kind of the best part of the whole show—a lovable dinosaur who behaved more like a retriever than a T-rex! We're guessing you feel similarly about Dino, which is why you're channeling his Snorkasaurus tendencies. In that case, this Flintstones Adult Dino Costume will properly prep you for your next costume party, whether you wear it solo or team up with the Bedrock crew! Dino is fun all on his own, but grab Fred and Barney, or Wilma and Betty, or the whole gang and you're looking at a costume that will live on through history!

This Dino costume is officially licensed and comes with the signature purple jumpsuit with black spots. Newfangled hook and loop closures add "modern" convenience to your prehistoric look, and the blue foam collar has Dino's orange"dog" tag.  But it's the headpiece (and all that energetic yapping!) that really transform you into your favorite dino-dog. Have fun knocking people over with hugs, curling up on the sofa when you need a nap, and following around your favorite friends all night long!

Being a supporting role is fun, but don't let them forget about you! Sometimes Dino gets a bit riled up, and snaps or snarls at his human companions. We don't recommend overdoing this, but make sure your pals know you're still a dinosaur and thus a force to be reckoned with. So when Joey tries to take the last piece of pizza from you, make sure he gets that Dino charm and learns his lesson!