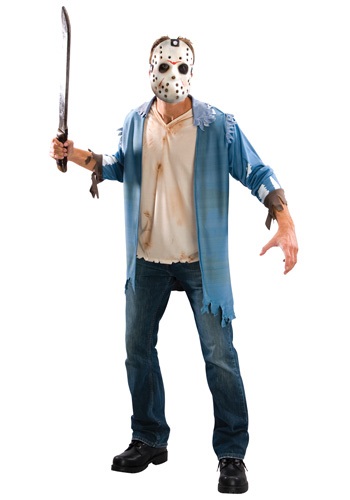 Did you know that the first Friday the 13th was on the Fourth of July? Ha! Did we get you? Eh, probably not, you seem to be the type of person who doesn’t fall prey to crappy jokes like that. However, if you think you can survive our sub par jokes, do you think that you could go 16 rounds with Jason Voorhees and come out to tell the tale? Well, you will just have to see!

This costume is 100 percent polyester, but 200 percent creepy, scary, and all around terrifying! You are sure to be the best, worst person at your annual Halloween party in this officially licensed Jason Costume from Friday the 13th. The dark blue jacket has an attached green shirt, staying true to Jason’s original outfit in the hit movie series. Hook and Loop fastener secures the jacket and shirt, ensuring that it doesn’t fall down when you start chasing your next victims. Of course, no Jason Costume is ever complete without his iconic hockey mask, luckily for you, this costume includes our version as a foam hockey mask with a secure elastic band.

"There's a legend around here. A killer buried, but not dead. A curse on Crystal Lake, a death curse. Jason Voorhees' curse. They say he died as a boy, but he keeps coming back. Few have seen him and lived. Some have even tried to stop him... No one can. People forget he's down there, waiting..."