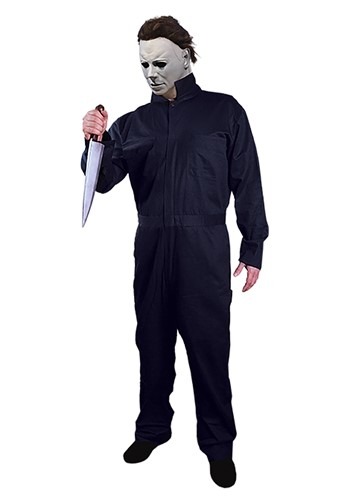 C'mon Mike! Die already! Loomis shot you a bunch of times and threw you off of a roof in Halloween. Then, Laurie and Loomis blew him up inside of a hospital in Halloween II. In Halloween III: Season of the Witch... okay, so we're still not sure what's going on with that one and Michael Myers didn't really have anything to do with it. But he's back in Halloween 4: The Return of Michael Myers and then again in the fifth installment of the series. And he's still not dead! What the heck, guy? Can't a couple of teens just enjoy their weekend without being chased around by some kind of crazed, evil killer?

The answer is no. Horror movies have taught us that it's just never safe to assume that their ISN'T some kind of maniac lurking in the shadows and Michael Myers comes back every time... and hey, isn't it about time he showed up again? Maybe it's your turn to take on the mantle of Mike!

Now, you can become the man who always comes back with this Halloween Adult Michael Myers Costume! The officially licensed outfit comes from Trick or Treat Studios and does an astounding job of recreating the coverall jumpsuit that Michael wears in the films. It comes in a dark blue color and even has cargo pockets throughout the suit. Just slip it on and you'll be ready to chase after Doctor Loomis, just like in the movies.

Up the Creep Factor

We recommend pairing this costume up with one of our toy knives for the ultimate creep factor! You can scare friends and family alike with this freaky look! Be sure to check out some of our other great accessories from the films to customize your look.