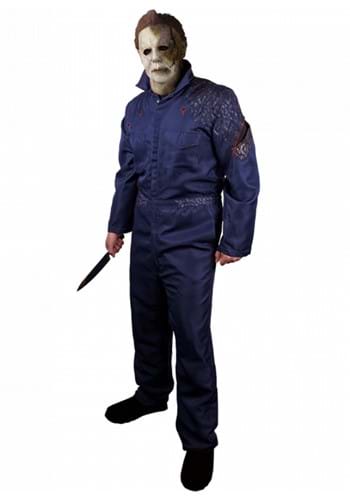 The Night He Came Home...Again

Here's the scenario: Michael Myers, the Halloween Butcher, was born and raised in Haddonfield before he killed his older sister and was sent to prison. When he escaped, he came straight back to Haddonfield to start a fun little murder spree that apparently includes anyone who lives in the town. Rinse and repeat about twelve-ish times. We've got a bright idea for anyone who doesn't want to get sliced with Michael's knife or strangled with a telephone cord: Why not...move? Michael keeps coming to Haddonfield, so he can have the town. Everyone else can start a new life in New York or Texas or even Chicago - just anywhere other than that little town in Illinois with a unique kind of pest control issue.

He's baaaaack!! Pay tribute to that iconic and persistent horror villain with an officially licensed Kid's Halloween Kills Coveralls Costume. The polyester jumpsuit looks just like Michael's well-known blue mechanic coveralls with a front zipper and an elastic waistband. The zipper makes dressing up easy, which is probably for the best (even though Myers doesn't seem to care about being stabbed with knitting needles or poked in the eye with coat hangers, you'd think that those injuries would still make movement a little more difficult). Realistic bloodstains and bullet holes will remind victims that Myers can be injured, but he can't be stopped!

The Terror of Haddonfield

Haddonfield's famous former resident strikes again! Roam the streets of your town in the ultimate scary costume. Instead of wreaking havoc, though, we suggest asking for candy!