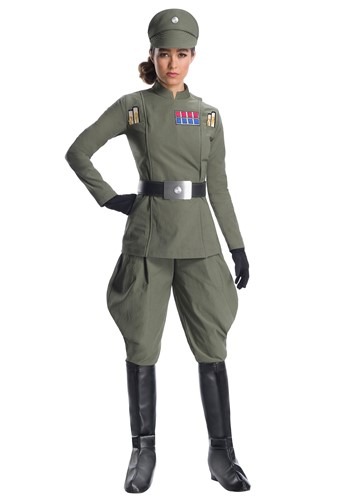 But someone has to do it! Being an Imperial Officer is something you'll be excited to write home about - it's a position with a lot of authority and grandeur - plus the uniform is pretty flattering. On the other hand, you have to deal with rebels making surprise landings on your planet-sized death machine, more rebels impersonating Storm Troopers, still other rebels getting caught in the trash compactor and messing up the works...it's a lot. Fortunately, you're just the person to put Emperor Palpatine's devious plans into action. The Dark Side is lucky to have you and your single-minded devotion to duty!

Command huge Star Destroyers, activate the bridge deflectors, operate the turbo lasers, imprison rebel scum - all that jazz! This Star Wars Women' Premium Imperial Officer Costume is perfect for fans of the epic space opera and is sure to get you a job as Darth Vader's personal lieutenant. The polyester olive drab suit includes a zip-up jacket with patch detail on the front to show your impressively high rank. A wide faux leather belt fastens around your waist with a metal buckle. The matching pants tuck neatly into the boot covers, which have faux leather fronts and fabric backing so that they fit snugly to your calves. The olive cap's visor shades your eyes while you stare into the depths of space, and the pull-on gloves keep your hands clean while you do the Emperor's dirty work.

Defeat those pesky rebels once and for all in your officially licensed costume! You've got all the power of the Death Star behind you - what could possibly go wrong?