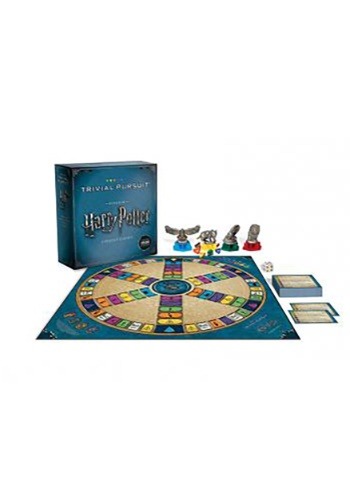 "…or do you take pride in being an insufferable know-it-all?"

Why yes! We Harry Potter superfans certainly do take pride in being Hermione-level know-it-alls. We understand the difference between wand woods and cores, can correctly pick Nearly Headless Nick out of a crowd of silvery-grey ghosts and know that Hagrid's hut was filmed in Scotland. That may seem trivial to some, but Potterheads know retaining an abundance of Harry Potter factoids will serve them well one day. Which day? The day they sit down with a group of Potter novices, experts, or even outsiders, and this Trivial Pursuit World of Harry Potter Ultimate Edition board game!

Prove your knowledge of the Harry Potter film series when you add this officially licensed Trivial Pursuit game to your collection! Based on classic Trivial Pursuit, this ultimate Harry Potter edition plays with the same rules and similar game pieces. Instead of traversing the board and answering general knowledge and pop culture trivia to fill a simple pie-cut mover, up to 4 players are quizzed on 6 different Wizarding World-themed categories that fill their House Mascot mover. Gameplay typically ends when the first player collects all 6 color-coordinated wedges. With 1800 questions to explore, however, you and your fellow Potterheads can keep the magic going for multiple rounds and a deep dive into the cinematic world of Harry Potter!