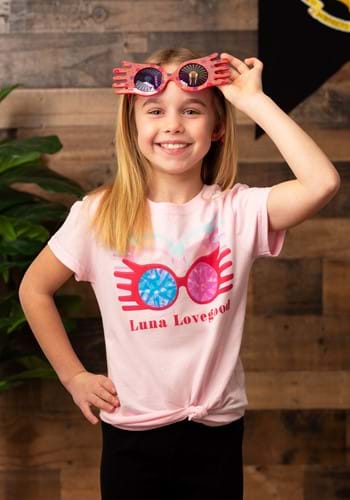 We all know and love Luna Lovegood for her quirk and peculiar charm, but throughout her Hogwarts years she really built up quite a resume! After being sorted into Ravenclaw, Luna eventually became a part of some of the most consequential events in magical history! In her fourth year, Luna joined the Harry Potter-led Dumbledore's Army, participated in both the Battle fo the Department of Mysteries and the Battle fo the Astronomy Tower, and co-led the Dumbledore's Army when the evil Lord Voldemort seized control of Hogwarts. She even participated in the final battle fo the Second Wizarding War!

It wouldn't be an understatement to call her tenure at Hogwarts legendary, and she just kept building upon that legacy out of school, becoming a Magizoologist, discovering cool new species, and marrying that hunk Rolf Scamander. Why wouldn't you want your little one to follow in the quirky witch's pointy shoes? This cotton Girls Luna Lovegood Glasses Pink T-Shirt is a good first step. Best of all, it's officially licensed, so you can worry less about the quality of its stitching and worry more about when to squeeze in some light reading of the series with your little one!