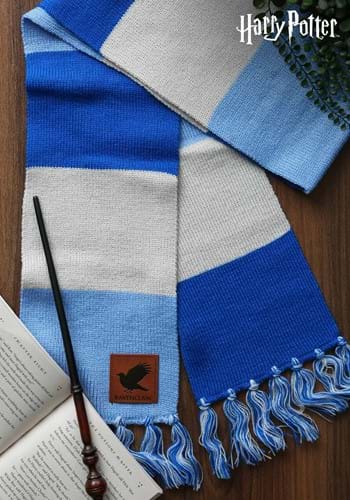 So, you're looking to become a prefect at Hogwarts? If so, you'll need to hone a few key characteristics: an authoritative swagger, a love for upholding the rules, some stellar study habits, and a knowledge of the castle's corridors, turrets, and towers (for patrol duties).

You'll also want to cultivate an on-point, prefect-appropriate appearance, with authoritative looks, even on casual days off. After all, if you're going to deduct house points from, say, a Slytherin, you'll want them to know just who they're dealing with!

This is an officially-licensed (very important to you prefect types) Ravenclaw House Patch Striped Scarf from Harry Potter! It boasts alternating color blocks in the house colors of blue and gray, with matching tassel fringe on the ends. A little leather patch with a picture of an eagle adds an extra special detail to this accessory. 10 points to Ravenclaw for an on-the-ball and prepared prefect!

The Eagle Has Landed

Remember when you're perched in your prefect role, not to let the power go to your head. Of course, you're witty and wise and a stand-out student, but a good prefect is humble and serves Hogwarts with honor! Now bundle up in this blue and gray scarf—that's an order!